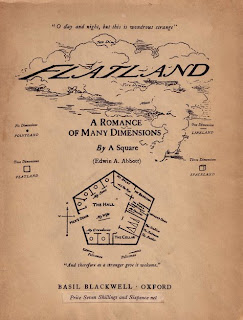 Flatland: A Romance of Many Dimensions is a satirical novella by the English schoolmaster Edwin Abbott Abbott. Writing pseudonymously as "a square", Abbott uses the fictional two-dimensional world of Flatland to offer pointed observations on the social hierarchy of Victorian culture. However, the novella's more enduring contribution is its examination of dimensions. Noted science writer Isaac Asimov described Flatland as "The best introduction one can find into the manner of perceiving dimensions."

(The story is about a two-dimensional world referred to as Flatland which is occupied by geometric figures, line-segments (females) and regular polygons with various numbers of sides.The narrator is a humble Square, a member of the social caste of gentlemen and professionals in a society of geometric figures, who guides us through some of the implications of life in two dimensions.The narrator is then visited by a three-dimensional sphere, which he cannot comprehend until he sees Spaceland for himself.After the Square's mind is opened to new dimensions, he tries to convince the Sphere of the theoretical possibility of the existence of a fourth (and fifth, and sixth ...) spatial dimension.)

Posted by Akshataa Vishwanath at 2:49 PM